Artist Danie Mellor finds connection to his maternal Indigenous heritage through historical photography. Steve Dow speaks with the artist who turns colonialist images into meditations on the past, present and future. 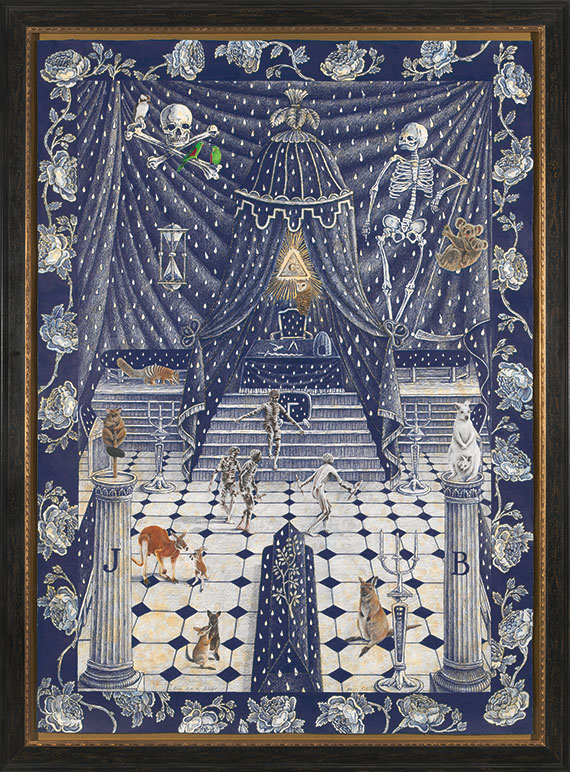 A softness and subtlety pervade the warm sepia and monochromatic tones
of artist Danie Mellor’s paintings, perhaps a gentle misdirection as he invites his audience to engage with often-hidden histories of cultural destruction and attempted genocide.

Simultaneously reproducing and reinterpreting late colonial photography of a century ago by drawing from his own extensive image archive, Mellor’s art speaks to Aboriginal notions of past, present and future unfolding simultaneously – “deep time” – as well as fixed Western ideas of photographs preserving specific historical moments.

In jujaba: [a thought space] (2021), Mellor’s recent exhibition at Artspace in Sydney, skulls can be seen across his paintings. One is in a tree hollow, signifying a tree burial. Another is on a skeletal form superimposed over an image of Yarrabah, a mission on the Cape Grafton Peninsula in North Queensland, a place Mellor’s maternal forebears would visit by boarding a tinnie in Cairns and sailing south. There is also a jawbone and a seashell-encrusted skull made from anatomical plaster casts; these artefacts are signifiers of ancestral legends of Aboriginal people from rainforest country. One concerns Girrugarr, a magical figure who could shift shape from man to eel and who journeyed across the continent from south to north while presenting the gift of language to the landscape, Country and to people.

“Part of that legend relates to the eventual splitting up of body parts, and the jaw – in the way that I’m symbolising it – relates to the idea of speech, of retelling history,” says Mellor. “There’s a whole narrative around culture being muted through language being denied, and that came about through the dislocation and removal of people from traditional Country. When people were taken to missions, there was an enforced rule against use of Aboriginal language,” he explains. “A whole layer of disassociation began with those removals, which also ensured that kinship ties were broken or disrupted.”

Mellor, who turns 50 this year, works from his home studio at Bowral in the Southern Highlands of New South Wales where he lives with his wife, Yorkshire-born artist Joanne Kennedy. In 2009, while still living in Canberra, he won the prestigious National Aboriginal & Torres Strait Islander Art Award for his mixed media work From Rite to Ritual (2009). Since then, Mellor has pursued themes and concepts in his work that resonate with other First Nations groups and artists. For his exhibition The Sun Also Sets at Tolarno Galleries in Melbourne in 2020, Mellor wrote: “Somewhat uncomfortably, the excavation of hidden histories in Australia suggested in this work alludes also to the desecration to which Aboriginal cultures and customs around the world have often been subjected.”

Mellor’s Ngadjon and Mamu heritage is through his mother, who was also one of his art teachers in high school. Born in Mackay in Queensland in 1971, Mellor attended Steiner (or Waldorf) schools, which use a Eurocentric framework for teaching. “I found it a challenging environment at times,” he says, choosing his words carefully, “and it was only after I had left school and began studying art that I felt able to explore and question the things I wanted to in a more open way.”

The European colonisation of Indigenous cultures from northern Queensland, where Mellor’s ancestors are from, coincided with the growth of photography as a form of documentation. In turn, photography has helped Mellor connect with his Indigenous heritage and culture. His blue-toned 2019 work A gaze still dark (a black portrait of intimacy), which is in the National Gallery of Australia collection, reworks an image of Mellor’s great-great-grandmother, Ellen Kelly, taken circa 1908 by photographer Alfred Atkinson, who was active in the Cairns region in the late 19th and early 20th centuries. Atkinson also photographed Mellor’s great-grandmother and grandmother. “I was very connected with them from a young age,” Mellor recalls. “My great-grandmother was alive until I was into my teens. So there was a living connection with family, as well as that archive.”

“For me, [using archival photographs] brings quite a personal language into my work,” says Mellor. “I’m quite interested in how those colours – the monotone and sepia – can infer and inspire emotions of nostalgia and memory, which can be quite fleeting. But when we look back into the reality of what these images signify, it is this incredible disruption and this catastrophic loss of Country and lives.”

In the image of Ellen Kelly, originally taken in Atkinson’s studio, she wears a Victorian dress and a Christian cross on a necklace. “At the time she was in domestic service in Cairns, so perhaps she was dressed for a formal portrait, an attempt to put the best face forward,” Mellor speculates. “Whatever is behind [his great-great grandmother’s presentation], I find the images captivating, they’re quite powerful. They represent moments in time and not just in their individual lives. They [Mellor’s ancestors] went through an incredible disruption in terms of being removed from Country, but when you look at how photographers captured Aboriginal people and landscape, they go beyond archival or family images. They are universal pictures because they encapsulate the monumental and most often catastrophic change for people who were divested forcibly and violently of a traditional life.”

Mellor invests time in applying layers of fluid paint to convey a pictorial story, patiently mimicking the print-toning process. “I begin from scratch. The baseline photograph, I’ll refer to but I’ll interpret it. I mostly work on board or on linen, and the process is one of building up layers of imagery.

“But sometimes the photograph or the crop or the edit is powerful enough that there isn’t actually anything to be achieved by changing it – in that sense, you have a more direct connection with that historical language. At other times, reinterpretation through recomposition is quite important; you’re then, in another sense, retelling or recreating narrative.

“There’s no particular tried and true, one-approach methodology. It’s almost like building a conversation. You have stops and starts and mistakes and blind alleys you go down in terms of image creation. “I guess what I’m looking for is a collection or arrangement of images to speak to each other in a cohesive way, so that audiences can experience each work in and of itself but then, in terms of the whole, they hopefully come away with a sense of narrative, of something happening that’s part of a bigger story.”

Is the initial gentleness of the imagery, for the most part, a deliberate strategy? “I hope so. In some ways, yes. My work tends to reflect and contemplate history, and it’s quietly if deeply political. There’s an initial engagement with beauty and composition that draws people into that sense of the majesty of nature, but behind that there is the sting of history, the truth.”

Danie Mellor will show at Tolarno Galleries, Melbourne in September 2021 and 2022; at Yavuz Gallery, Sydney | Singapore in a group show as part of Taipei Dangdai 2021; and will have a solo exhibition at FIAC International Contemporary Art Fair, Paris in October 2021. 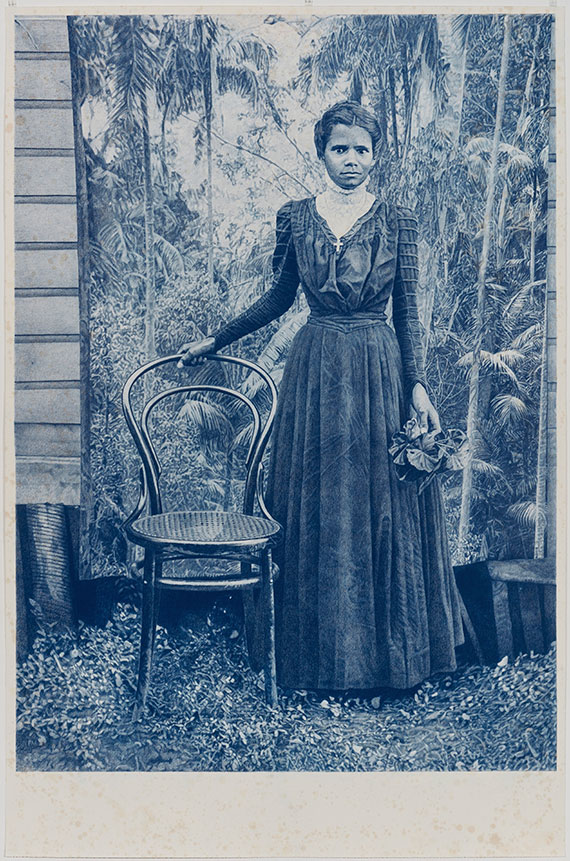 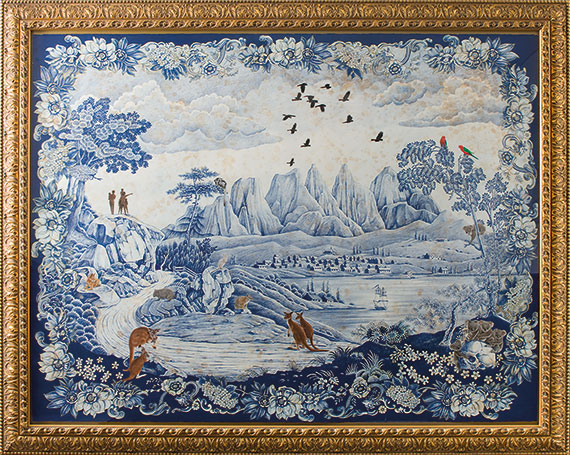 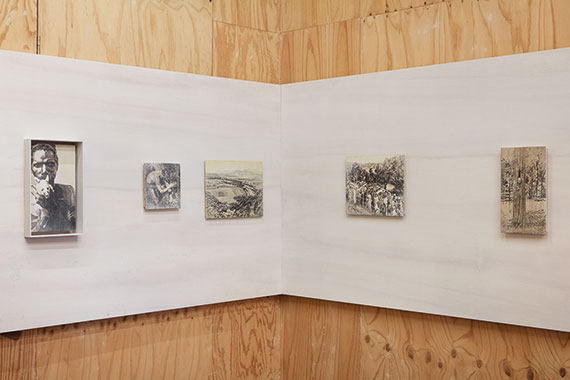 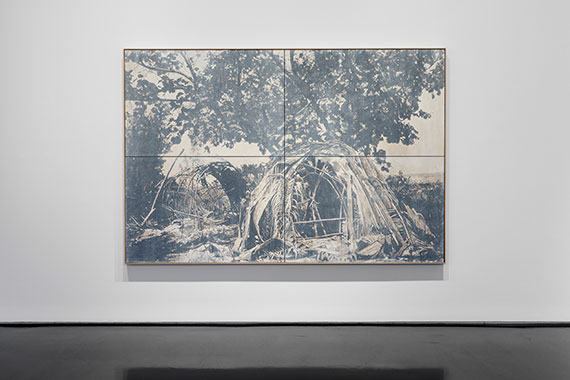