Let it be known that Hayley Millar-Baker has stories to tell – recounts that waver between fact and fiction. She morphs inherited histories into contemporary discourse through digitally archiving, layering, cutting and repositioning monumental stories into resonating black and white photo assemblages. Continually re-evaluating her practice and form, this Victoria-based contemporary artist is about to embark on a new phase of storytelling, leaving history behind to the historians.

feature by Nanette Orly May 2020 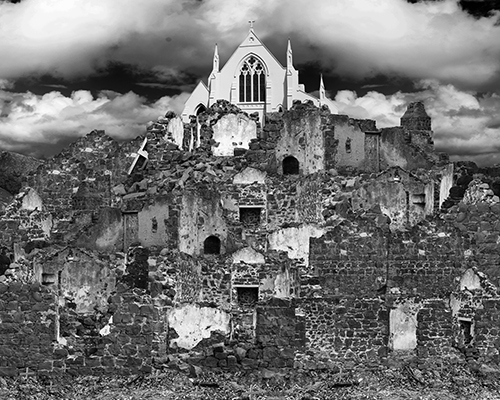 Image credit: Hayley Millar-Baker, Untitled (The best means, of caring for, and dealing with them in the future), 2018 from A Series of Unwarranted Events, inkjet on cotton rag, 80 x 100 cm, edition of 5 + 2APs. Image courtesy the artist and Vivien Anderson Gallery

Arts organisations have shifted focus, placing a new emphasis on celebrating artists whose stories have long needed to be part of this country’s cultural narrative. These artists are being given space in museums and galleries where their stories had previously been excluded. Hayley Millar-Baker is a contemporary artist, and storytelling is what matters to her most. Sharing generational stories – whether they be purely factual, fact-born turned fictional, or completely fictional – is how she brings lost moments to life. In the past four years she has exhibited in cities and regional art spaces across Australia, and while Millar-Baker has quickly become a household name, she is in this for the long haul.

Millar-Baker’s photographic practice brings to light obscured histories in need of retelling and remembering. Heavily research-based, and with much purpose, she digitally archives, layers and repositions individual images to create black and white photo assemblages. While she does draw inspiration from the stories of her own family – histories passed down through generations – you can sense her awareness that the effects of colonisation on Indigenous culture are a universal issue. Chopping and changing, hiding and revealing, layering and assembling sequestered narratives is a very deliberate process for this Victoria-based artist. An exemplar of this process is found in the four-piece series A Series of Unwarranted Events (2018), in which Millar-Baker orientated 300 layers of photographic imagery to recreate stories, including those of massacre and resilience, of the Gunditjmara people. As is evident with this series and other works, there are many truths to be found within Millar-Baker’s assemblages, but you really need to look for them.

While the history of her own family is highly influential in her practice, it’s a subtle revelation; there is no performative display of culture within her works. This allows her work to be seen without preconceived ideas about cultural background, opening it up to similar international dialogues around colonisation, past and ongoing. Another inspiration in Millar-Baker’s life is Tracey Moffatt, a photographer whose focus and resilience has paved the way for many younger photographers, like Millar-Baker, to come up and forge their own paths. The fact that these two artists were brought together last year to exhibit The Truth of What Occurred Remains (January 8 to February 23, 2019) at Broken Hill Regional Art Gallery is sensational but not inconceivable.

When producing works that respond to the reality of colonisation and racism, it can be extremely difficult not to get angry. These feelings are completely warranted, but as a driving force for artistic practice may not be the most sustainable mode for some artists. Millar-Baker chooses to create work outside of anger or disappointment, wanting instead to share stories of survival and resilience, positively focusing on what’s next, what could be, or ending the stories she tells the way she would prefer them to end. Ultimately, it’s the story that is the driving force of her artistic practice.

The first early-career survey of Millar-Baker’s work has been slated for display at UTS Gallery, Sydney, in 2020. There we were all in one place is a cohesive selection of previous series’ of works produced since 2016. In a way, this survey feels like a change of gears, celebrating where Millar-Baker’s practice currently is and where it’s about to go. This coming year will see Millar-Baker taking strides and venturing into new mediums to push her practice further. Wanting to depart from being labelled an ‘historian’, she will be producing new works that move away from historical renditions of colonisation twisted into cinematic narratives, to focus instead on storytelling that can resonate with people around the world.

Millar-Baker is also very conscious of how she populates her works, often choosing to leave her vistas unpopulated or occasionally inserting characters that aren’t human figures; a shield, perhaps, or a boomerang. Moving forward, we will see Millar-Baker herself feature as a character in her work for the first time. After being awarded a $15,000 Photography Fellowship, Millar-Baker will be revealing a new project, A lucky survival and thereafter, later in 2020, where she will play the character Unknown, a woman who survived a massacre which saw most of her clan’s demise. Staying hidden beneath shrubbery, Unknown was able to flee and her lucky survival permitted many generations to come after, including Millar-Baker’s very own.
Her pursuit to engage in international dialogues came to fruition when she was awarded a forthcoming residency at the Monash University Prato Centre in Italy. An exhibition of works to be produced during the residency, accompanied by a series of artist talks both in Italy and Melbourne, will allow for an international exchange of ideas and interrogation of issues experienced universally.

Every decision Millar-Baker makes in realising new work is very deliberate, with meticulous layering and image placement now synonymous with her name. This intentional mentality permeates right down to where her works end up finding homes. She regularly engages in acquisitions with museums and art institutions that have the means to preserve and care for her deeply personal stories. It is quite apparent that as an artist she is very critical and considers every part of her practice end-to-end, which would explain how her practice alternated from painting to photography. The camera allows Millar-Baker to shift a certain gaze – balancing out a history where Indigenous people were the subject of photography, and rarely their own authors. Utilising contemporary photographic processes allows her to tell multiple stories at once, and for an artist driven by narratives this has proven to be a more dynamic medium.

Hayley Millar-Baker has always wanted to be an artist. While her career may be picking up momentum quickly, she is patient and unpretentious, just as her practice is strategic and considered. For someone who knows their language, family and history, identity will inevitably play a role in the creation of artwork. However, Millar-Baker has a remarkable ability to invite people from all walks of life into momentous stories, without her identity being the focal point of discussion. This coming year will see Millar-Baker push her own boundaries as a contemporary artist – one who has a very clear vision for the future of storytelling. Pay attention, because she’s only just begun.

Hayley Millar Baker, I WILL SURVIVE at Vivien Anderson continues until Wednesday March 11, 2021

Hayley Millar Baker, I WILL SURVIVE at The State Library of Victoria forecourt continues until Sunday March 6, 2021 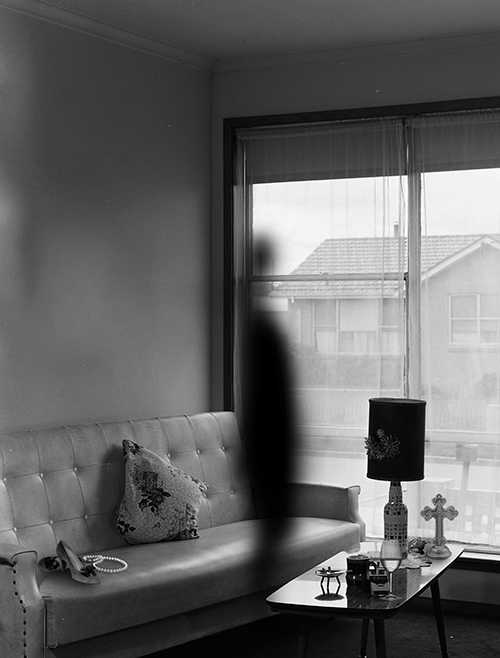 Image credit: Hayley Millar-Baker, Untitled (Flight), 2019 from the series The Trees Have no Tongues, Inkjet print on paper, 90.0 x 68.0 cm, edition of 5. Image courtesy the artist and Vivien Anderson Gallery 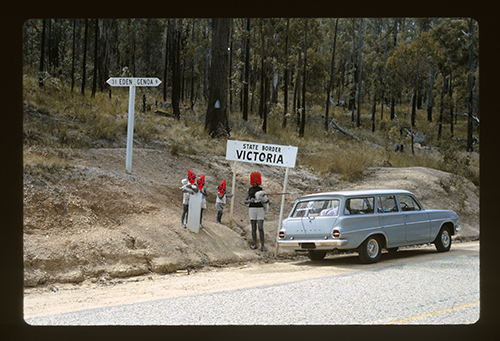 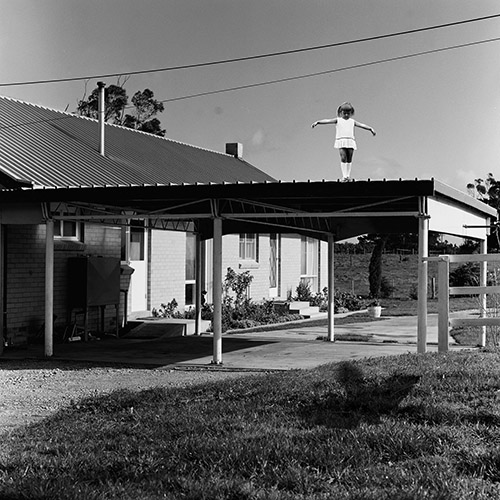